< back to Caricature Gallery, Music or Iggy the Dragon

26/05/04 (Visitor Counter=71,532): Here be are dragons.
Hey hey. No new GCW comics for a while, so I'm putting my cartoons that I do for the local university student magazine online. They're full of inside jokes and stuff that most of you will never grasp, so... I hope you like being confused. Or at the very least, that you like DRAGONS.

In other news... rehearsals for 'Tween Heaven & Hell, the Corey Matthews musical that myself and Luke Di Somma are co-writing music for have already kicked off. Tonight I heard the cast singing the opening song, which I wrote. Yesterday that song was just some pencil scribblings on a few sheafs of manuscript... now it's a song. (A cheesy one, at that!) Magical. I couldn't wipe the grin off my face. ^_^ 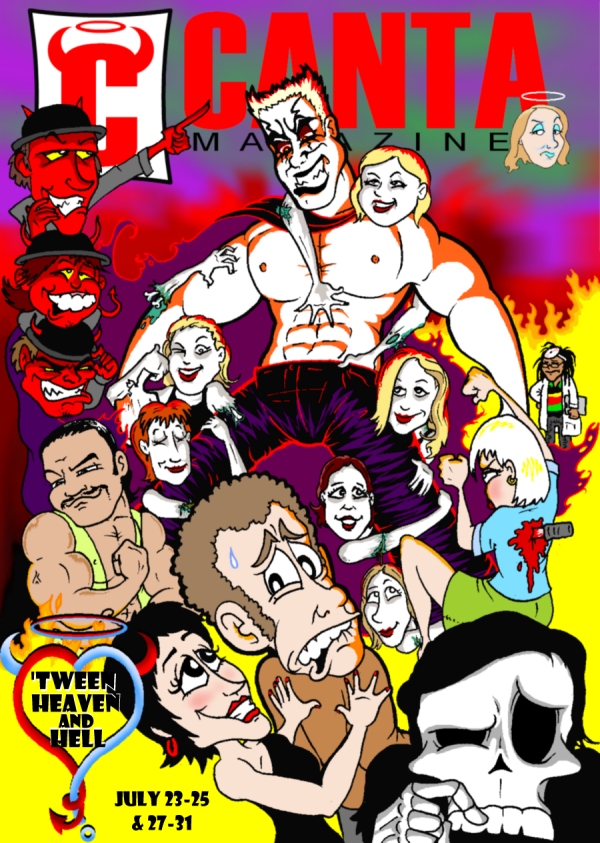 The show 'Tween Heaven and Hell has finally opened, which means that I finally have time to update TmsT and put some comics online. So I've put two full-page "Iggy" cartoons on the comicpage, to make up for my lack of updates last week.
I tells ya, starting a full time job is not the best thing to do in the final week before opening of a full scale musical.

No Pun Of The Week intended. 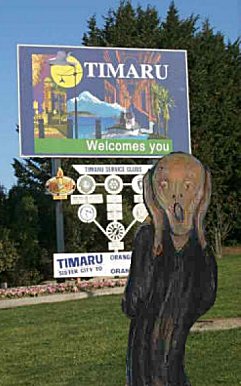 This week's cartoon takes a serious look at dealing with timetable clashes... then promptly plunges into less serious regions of surreality.

And in case any of you are interested, I'm putting some of the tunes that I wrote for the hit musical 'Tween Heaven and Hell online. This week's funky little number is the opening song, "Robert Sagwold Must Die", in which the ruthlessly ambitious Chelsea Wicker incites the murder of one of her office workers, the harmless Robert Sagwold (after which he goes to Limbo and has wacky adventures there). Unfortunately, a couple of lines were lost in this version recorded here, but if you're wondering, they were "wa-baba-lu-bah, he must die" and "a de-dede-du-la, he must die". It's my favourite song in the show, and it contains as much Andrew Kepple musical cheese as I could cram into it.
Enjoy.

"Robert Sagwold Must Die" - Rightclick here and select "save target as" Copyright MMIV Corey Matthews (lyrics) and Andrew Kepple (musical score). Performed by the 'Tween Heaven & Hell MuSoc band, conducted by Luke di Somma. All rights reserved. Not to be used as a flotation device. May contain traces of nuts. If pain persists, keep your finger outta there!

You see? I *AM* updating this website again, o ye of little faith! Come back later this week and I might show you some of the Flash animations that I made for the DramaSoc show "Alice in Wonderland".

The University of Canterbury Students' Association Performing Arts Awards, "The Madcaps", were on Friday, and us musical types sure cleaned up.
Luke Di Somma and I won Best Original Music for our co-composed score for 'Tween Heaven and Hell (written by Corey Matthews), which also easily scooped up Best Musical and Best Show (The "Supreme" Award), and its leads nailed other awards such as Best Female - Louise Fryer, who also starred as the Queen of Hearts in Alice in Wonderland - and Best Male, Stephen Townshend. Stephen's animutational masterpiece "Monster Deer" was also screened that night because it was on the same tape as "Ignatius versus Dodgy", which got another screening, at which John himself was present. Monster Deer seems to have become somewhat legendary at the university here...
The theme of the evening was "Medieval", so naturally I built myself an Ignatius dragon costume on Friday afternoon. No photos YET - my camera is broken and I found that it'll cost $500 to fix, so screw that for a joke - but many photos were taken. So, when will you get to enjoy this award-winning music? You've already heard Robert Sagwold must Die, so here are some other hits from the show: Rightclick and select "Save Target As" to download them!


Welcome To Limbo - Music by Luke Di Somma. After being killed, Robert finds himself in Limbo, and is introduced to Limbo Jimmy, who is like some kind of evil, sex-crazed mime with telekinetic powers.

Lookin' For Some Lovin' - Music by Andrew Kepple (with adjustments by Luke Di Somma). Sung by the Grim Reaper after he reluctantly ends up singing in a Karaoke bar. This piece is infamous for being the one that was so nasty that even the composer (me) couldn't play it properly until after opening week. At least Death (Darryn Woods) could sing it! Ahh dang it, ALL my music was infamous for being difficult. That's why I had to write Night of the Singing Dead - to restore peple's faith in my ability to write music that didn't require the performers to be musical massochists.

Feline Frenzy - Music by Andrew Kepple. As if Corey's lyrics weren't challenging enough in this song, I had to go and write this piece as a grand epic full of changing time signatures, modulations to new keys every bar or so, and bizarre "chords" *cough* that even Luke, who has produced some avant garde compositions in his time, wasn't comfortable with. Feline Frenzy is the ugly duckling of the show, being the dramatic, orchestrally-inclined piece in a "funk rock musical", and also being technically challenging for the soloists, the chorus, and the band. They all did a darn good job of it, and as far as I know, nobody tried to kill me because of it.


Luke's and my separate musical projects for university theatre were also nominated for Best Original Music, namely Luke's music for Alice in Wonderland, and my Night of the Singing Dead, but nothing could compare to our combined efforts in 'Tween.
Lisa Norriss was awarded Best Director for Wonderland, and, as expected, Night of the Singing Dead's Count Vladimir (Adam Tetzlaff) won the Biggest Balls-Up, for "popping out of his speedos", as it were.
Disaster Theatre. Ain't it awesome? Next year I plan to contrive a musical where the singers are put in mortal danger onstage, and the only way that they can avoid certain death is to sing the outrageously difficult music that has been written specifically to target their individual musical weaknesses. And sing them well. Because now that I have proof that it can be done without the mortal danger, the next logical step is to add fire and spiky objects and dangerous animals and lava and whatnot. Muahaha.