< back to Caricature Gallery or Flash Animations

Below are excerpts from thisstrife.com/sluggy/tmstsept03.htm.

Recently I have heard rumblings from a number of TmsT customers who want the once-regular feature of Goodbye, Cruel World to return to the now stagnating comicpage. While this makes me pleased (that GCW is actually popular enough to be missed) yet unsettled (that I have to get off my lazy ass and draw more GCW cartoons) I'll have you all know that this week and next week I am a busy little beaver with THREE (count em, ONE, TWO, THREE) shows on at university. The first, "3Some (with 4play)" is DramaSoc's yearly show featuring 3 plays by DramaSoc members, but with an extra bonus play this year, hence "4play". Final night is... shivers, it's tonight - Thursday the 11th of September! 3Some with 4play kicks off its 3rd showing, in its 3rd year at 7:30pm on the 3rd floor of the UCSA building, in Cloud 9 (hey, 9 = 3 squared... so it's kinda three-ish) and for only 3 bucks it's horrendously underpriced entertainment. But why am I even telling you this? The place was packed last night and tonight it's going to be darn near impossible to get in if you haven't already bought your ticket from the desk in the UCSA building during the day. So don't bother. Stay at home. You've missed out, fool.

The second show, another three-night-only extravaganza is the 2003 MuSoc show, Cantabrian Idol, a piss-take of the most popular reality show in NZ at present, American Idol. Featuring the musical and comedic talent of a small-ish cast and band, CI is one of the most anticipated UCSA performing arts shows this year, with movie-trailer-like rumours being whispered excitedly throughout the university. See poster for details.

The third and final show for the year is a tradition started by the other component of Canterbury's performing arts triumvirate, the Comedy Club. And that show is IMPROV D3ATHMATCH - the THIRD clash of the improvisational talents of Comedy Club, DramaSoc... and now, MuSoc, a newcomer to the improv arena. With DramaSoc having reigned supreme since the first Improv Deathmatch back in 2001, they'll be clinging with a thespian deathgrip to the trophy (a polystyrene tombstone) as vengeance-bent Comedy Club will be determined to get third-time-lucky, whilst MuSoc invests in the "beginner's luck" theory to prove itself, especially since I am on the MuSoc team, rising at last from the ranks of the Muso. (Fear not, the position of Muso is to be filled by Luke diSomma, the Musical Director of Cantabrian Idol.) It ain't gonna be pretty, as the holy trinity of performing arts at Canterbury are turned against one another, even though most of us have ambiguous - or in some cases amtriguous - allegiances anyway.
[...]

I'd love to stay and chat but I've gotta go and play the accordian in "Cantabrian Idol", which ALSO features some of my award-winning animations as background projections behind the singers. As of today (er, "yesterday", but still "today" for Americans) I may call myself an animator (as opposed to merely a cartoonist).

In other news, Cantabrian Idol was a resounding success, with 314 being the official number of audience people who came to see the show over the three nights. In fact it was such a success that there is going to be a "New Zealand Idol" TV series being made in NZ soon (in Auckland, probably...) in the tradition of "American Idol" and "Australian Idol". It'll be interesting to see how closely Cantabrian Idol has predicted the course of reality, as so many of my creations do. Anyway, I'm pleased to say that my (sometimes animated) backgrounds were quite impressive on the big projected background screen thing behind the singers, and my Fanimutation skillz came in handy for one song, Bridge Over Troubled Water, for which I used a photo of the Bridge of Remembrance (a local war memorial). [...] 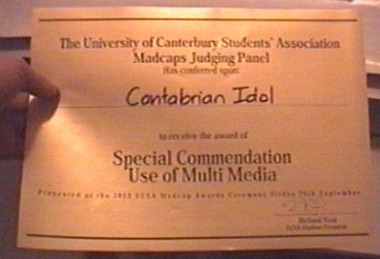 As you can see, Cantabrian Idol did well at the Madcaps, AKA the University of Canterbury performing arts awards. Not only did my background animations scoop a special Multimedia Award, but the show ALSO won Best Musical, and was nominated for awards in many other categories of exellence. Rock on, Cantabrian Idol! Yay MuSoc! We did it! Yatta! (And we totally kicked the Law Revue's drunk and obnoxious ass.) Plus, DramaSoc's Cosi easily scooped up Excellence in Set Design, caned the Law Revue for Best Comedy, and ended up winning Supreme Overall Show for the year, as well as landing Christina Stachurski with Best Director and Erin Harrington with Best Female Actor/Actress/Thespian/etc. In your face, Law Revue! *Ahem*...
Anyway, I've put some of my more memorable animations from Cantabrian Idol online. They're nothing spectacular, but they were just intended to be background projections for when the cast performed.
As the "contestants" gather onstage
BG for a terrible rendition of "My Heart Will Go On" (This animation is considerably faster than the one used during the show)
Fireworks - when final winner announced