< back to 20th-Century Flashbacks

Below are excerpts from thistrife.com/sluggy/tmstmar04.htm (mixed-up filename).

Well, the time is up. The Goodbye, Cruel World comic that you deserve has been completed... well, finished anyway. Conceived and executed by four artists and GCW experts from around the world, this is your GCW comic for the week. This is one that was made by YOU PEOPLE.
Ladies and gentlemen, haxorboys and fangirls, here... is...

So what else is new? Utterly nothing, because I've been on Easter holiday. Muahah!
So what is old? Ahhh, NOW you're in for a treat.
Some of my attempts a storytelling are old.
I wasn't "gifted" with the ability to entertain people through cartoonish stories about suicidal rodents and tapdancing gods. No, I had to learn how to do that. And recently, I discovered some old books of mine from primary school. Books filled with my own "process writing" - an interesting look into how the themes of my stories have changed since seventeen years ago... Or in some cases, a disturbing glimpse of how little I have changed since then.
So for this week, I will be presenting some of the best (and worst) fiction of Andrew Kepple, age 7.
(Spelling will remain uncorrected, for authenticity, amusement, and to prove that if a seven-year-old knows better than to use apostrophes to denote plurals then SO SHOULD YOU.)


And the moral of the story is: eating woodcutters is bad, if you're a grasshopper.


April 11, 1987:
Once there was a witch that liked to eat little boys and girls. One day, as she went out, she saw a little girl so she gobbled her up. But while she was eating little girls and boys, a big boy took some of her magic spells and and got home, very quickly! then he threw it out the window and it turnd into $50! so he turnd a one cent into a rock and he went out to finde the witch. He found her just about to eat another little boy when he threw the rock at her and she got killd.


The End.
Damn, I was such an optimist back then. Tune in tomorrow for more wonderful childhood stories of cannibalism and murder! Yaaay! 20/04/04 (Visitor Counter=63,497): Life, what is it but a nightmare?
Today's Tale of Tragedy from 1987...

Mm-mmm, that bugy ice-block sure sounds delicious. Too bad I ended up getting killed at the end.
I do not remember why I put quote marks around "eatin". Maybe I was unsure of the correct spelling and was writing it as it sounds.

Tune in tomorrow for the next wonderful piece of prose that may some day be used to my advantage in a court of law (insanity loopholes).

April 7, 1987:
Once there was a gofongo that liked to eat little girls and boys. One-day he met a fish swiming in the sea. he took a deep breath and jumped into the water. For a minute he
he was all right but he browned.

Based on the endings of my other stories, I'll assume that "browned" means that he drowned. I sometimes mixed up "d" and "b" because really, one is the other, but viewed from behind. It's all about qersqective.
A "gofongo", I believe, is a sort of monster fish-creature with singing knees and an appetite for bicycle parts. It's in some crazy poem that I read back then.
And while I'm at it - here's an innocent true story that I wrote that year, which these days could be taken by the American Intelligence (haha, paradox!) to be some sort of confession to terrorism and lock me away. 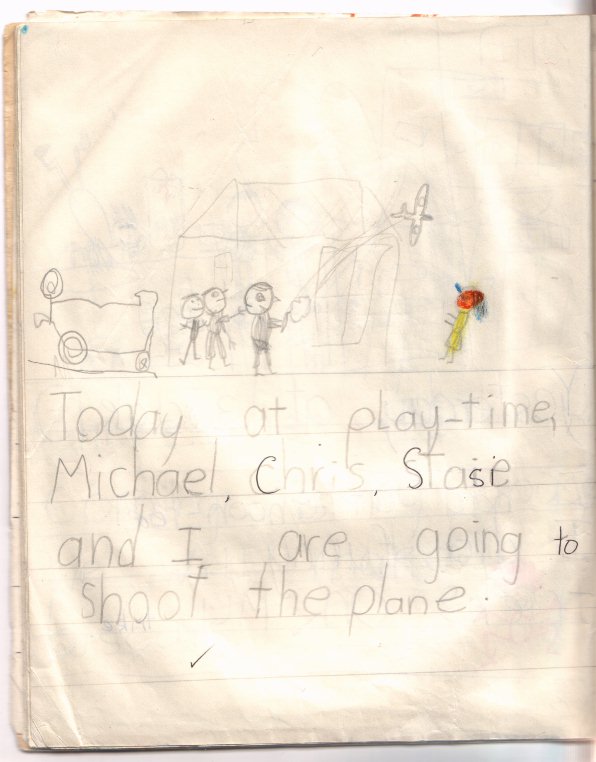 That object on the far left of the picture sure looks like a weapon of mass destruction to me! Quick, somebody call the authorities and have me arrested! 22/04/04 (Visitor Counter=64,021): How can a skeleton be fat, anyway?

??/??/1987:
Once there lived a big fat monster that chased people, and when he caught them, he made them into monsters too. One night, he saw a baby. the cride so the moster fell back into some mud and dide.

Closely followed by...
June 20th, 1987:
Once there lived a big fat skelleton. When he caught them he ate them and made them into skelletons too. He

This story was never completed. The final word "He" was just erased slightly and that is where it all ended.
UNTIL NOW.
We have the technology to complete this story. At last, mankind may know just how the story of the "skelleton" concludes. Utilising the latest, advancedest, state-of-the-art-est technology in artificial intelligence, we have built a supercomputer that has been studying the writing style of the Andrew Kepple as it was in 1987, and after many, many hours of processing time, it has finally produced the following story:

Once there lived a big fat skelleton. When he caught them he ate them and made them into skelletons too. He chased some boys and girls and ate them. Then he saw a woodcutter and he threw a magical grasshopper at him. He turned into a bugy and the skelleton ate him and turnd him into a bugy-skelleton. But the bugy turnd the skelleton into a skelleton-bugy! Then I ate a bugy ice-block and I burst all over the skelleton, who dide! The bugy also got killd.

Er... tune in tomorrow, kids! We've got an even better story next time - and it's the earliest recorded evidence of my tendency to dream of world domination! Guess how it ends. Yes, you guessed right.

A story in two parts:

15-9-87
Once up on a time, there was a rat that wanted to get to the planet jupiter so that he could get the majic sleeping pills to make every rat in rat-land fall asleep (excpet him,) so that the world could be his.....
he worked on making his space-ship says, and nights intill it was finished. then he climbed in, and blasted off into space.

21-9-87
But when he landed on jupiter, the space ship crashed into 500 little bits. He got pushed up into space but the pills did too! One of them fell into his mouth. So, he ate it! He fell asleep. As far as I know, he is still asleep. And what about the space-ship? Oh, yes the space-ship turned into dust.
THE END.

How poignant.
And it's a pity that Pinky & The Brain had to rip off my idea and not pay me any royalties, but oh well. It's a harsh, cruel, uncaring world.^_^